According to the National Institute of Mental Health (NIMH), Bipolar disorder affects approximately 5.7 million adult Americans every year.  The median age of onset for bipolar disorder is 25 years (NIMH). However, bipolar disorder can begin in childhood and sometimes doesn’t manifest until a person is much older – in their 40’s and 50’s.

While western medical treatments typically include medications to help curb patient’s symptoms, Traditional Chinese Medicine (TCM) takes an approach that addresses the underlying patterns.  In fact, bipolar is not specifically found in Chinese medicine texts.  The disorders that Chinese Medicine does address are mania and depression.  The TCM practitioner then treats based on the patterns appearing at the time of treatment. Typically, mania is given more attention as its symptoms can be more dangerous or obtrusive to the individual and the general public.

Chinese medicine always seeks to identify the patterns causing the imbalance.  Treatment aims to bring the patient back into balance. Chinese medicine considers both mania and depression disorders of the spirit mind. Both can be caused by excess emotions, particularly excess anger and joy.  However, a comparison of Chinese behavioral symptoms highlights the opposite behaviors displayed between mania and depression:

Once the Chinese Medicine practitioner determines whether the patient is presenting symptoms of mania or depression they can further customize the diagnosis based on the distinct patterns within the broader category of either mania or depression.

Patterns of the Mania Phase

Chinese medicine differentiates mania into four distinct patterns: Heart-Liver fire; phlegm fire harassing the Heart; Yang Ming bowel heat; and blood amassment.  While there are many similarities between patterns, there are also important distinctions that help the practitioner differentiate the treatment. 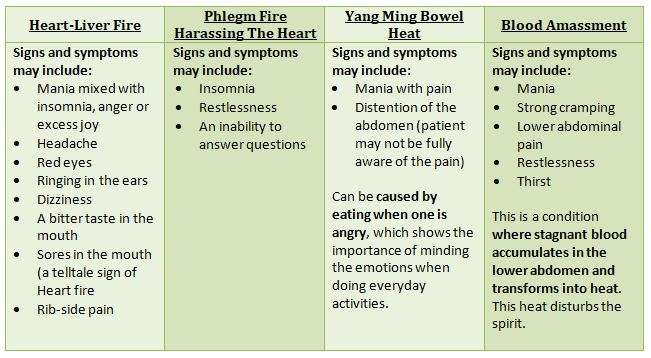 Patterns of the Depressive Phase

The depressive phase of bipolar disorder also has four main patterns: Liver qi stagnation; qi stagnating with phlegm, Heart-Gallbladder qi deficiency; and Heart-Spleen disharmony.  As with the mania phase, while there are many similarities between patterns, there are also important distinctions that help the practitioner differentiate the treatment. 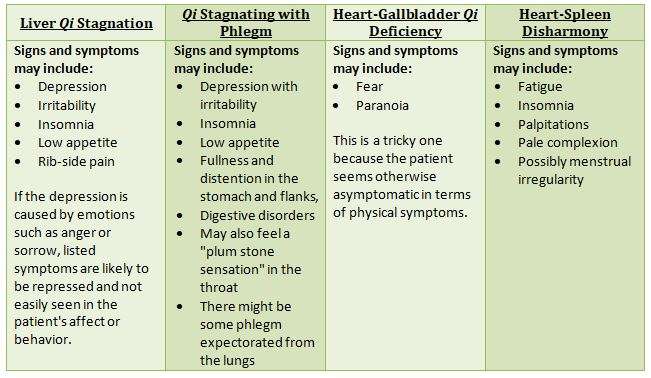 As you can see, Bipolar Disorder has a lot of commonalities between the different patterns.  This is why bipolar disorder is not really seen in the classical texts where mania and depression are.  The patient will present with the same underlying pattern regardless of what phase they are in and that is what should be treated, the pattern not the manifestation of symptoms.

It is important to recognize that mania, depression, and Bipolar disorder are not a weakness or a personality flaw of an individual.  They are merely a manifestation of an imbalance that has occurred.

A licensed acupuncturist can identify this pattern of imbalance and develop a treatment plan that can help manage the imbalance and very possibly correct it.  It is also very important for anyone with this disorder to have a therapist and support system in place.